It's official: Clemson has finalized its football schedule for 2012.

Here's how it looks:

Auburn in the Georgia Dome to kick things off. Three home games to finish the season. Georgia Tech and Virginia Tech at home with a week off between those tough games, but then only a five-day break before playing at Wake Forest on a Thursday night.

“I want to be more known as a great athlete not just at receiver, but as a kick returner and special teams, also," Watkins told Dinich.

Orange and White's Kerry Capps has a nice profile of Clemson's new defensive coordinator Brent Venables, who has worked with some of the top coaches in the country and brings a different perspective to the Tigers' coaching staff:

For Venables, the trunk of his personal coaching tree is Hayden Fry, long-time head coach at Iowa, who has sent a string of former players and assistant coaches to high-profile head coaching jobs, including Bob and Mark Stoops, Bill Snyder, Barry Alvarez, Jim Leavitt and Bo Pelini, among others. 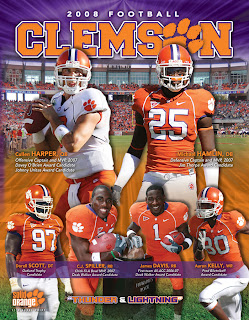 Exhibit No. 3,546 of the hypocrisy and stupidity of the NCAA: Two Clemson football players could be in hot water for appearing on party fliers promoting a get-together at a nightclub. (It was a birthday party for one of the players.)

According to the short story by The Charleston Post and Courier's Travis Sawchik, "NCAA rules prohibit employing an athlete's name or likeness to promote a commercial interest." 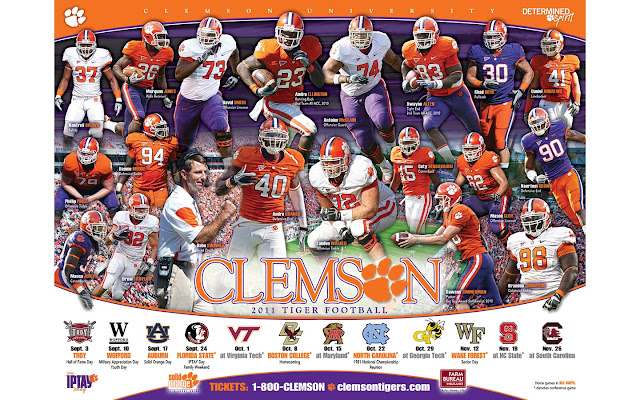 While we wait for the ACC to get its act together regarding the 2012 football schedule, Clemson has set its non-conference slate for the upcoming season.

As announced on Thursday, Clemson will open the season on Sept. 1 in Atlanta against Auburn in the Chick-fil-A Kickoff Classic. The Tigers will host Ball State on Sept. 8 and Furman on Sept. 15.

It's official: Clemson vs. Auburn on Sept. 1

Is it me, or is there a lot of football news getting pumped out in February? Or is this just how the Web news world works nowadays? (I'm pretty sure it's the latter.)

Beyond the intrigue of two top football powers in the South facing off to open the season, this game will perhaps put an end to the Chick-fil-A recruiting squabble.
Posted by Trey at 5:11 PM No comments:

Via Orange and White, the Atlantic Coast Conference put out a statement today that says the release of the 2012 schedule for ACC football will be delayed.

I'm guessing this is all related to conference expansion and realignment -- not just in the ACC, but across the country.
Posted by Trey at 4:14 PM No comments:

Clemson offensive coordinator Chad Morris tells the Orange and White that All-American receiver Sammy Watkins, who gathered every conceivable honor as a freshman last season, could reach even higher ground this fall, but it won't be easy:

“What helped get him to where he was as a freshman, this offense can help catapult him even more,” Morris said. “He’s going to be even more of a high-profile guy. The challenge to him is how hard is he going to work to prepare himself going into the second year of this system."


Morris also says he wants to open up the talent-rich state of Texas to Clemson's recruiting efforts.
Posted by Trey at 11:53 AM No comments:

Clemson Coach Dabo Swinney is sharing the financial love with his assistant coaches.

After earning big financial incentives (and a salary boost to $1.9 million in 2012) for leading the Tigers to their first ACC title in 20 years, he decided to kick in a hefty chunk of that bonus money -- $265,000 -- to the $450,000 of raises that the university doled out to the assistants.

I wish I worked for a company like that.
Posted by Trey at 12:36 AM No comments:

The offensive braintrust at Clemson is paying a visit to the University of Nevada this week to gather some ideas on how to run the ball more effectively. Nevada Coach Chris Ault is noted for his "Pistol" offense:


Sounds good to me.

• Clemson offensive coordinator Chad Morris is looking for ways to make his squad "tougher, meaner and more physical."
Posted by Trey at 12:38 PM No comments:

“Brent’s just been great,” said Swinney. “He’s a tremendous fit in every regard – in football, in recruiting, personality, and chemistry..."

• Clemson has begun "all in" drills, which are demanding tests of agility and fitness. These could be important for a team that folded down the stretch in 2011.

• Clemson assistant coach Jeff Scott has been named on of the top 25 recruiters in college football by Rivals.com.

Tigernet sat down with Clemson Athletic Director Terry Don Phillips recently, and they've posted the conversations as a four-part series. These are long, but well worth your time.

The first part deals with the Tigers' basketball program, which is not the focus of this blog, but the other parts are outstanding.

Anderson, who played at Clemson from 1984-1987, was a childhood hero of Peahuff's, and the two eventually became great friends.

An insane rumor popped up on the Internet the other day: Clemson and Florida State could be poised to jump to the Big 12.

According to Kerry Capps at Orange and White, here's what's behind the rumor:

Enthusiasm among rank-and-file fans for the addition of Syracuse and Pittsburgh to the ACC seems underwhelming – especially in light of ACC commissioner John Swofford’s announcement last week that the conference will move to a nine-game league schedule, with Syracuse joining the Atlantic Division and Pittsburgh the Coastal Division as every-season opponents.

Faced with the prospect of trading even the occasional home-and-home series against Georgia or Auburn for a yearly date with Syracuse and a bi-annual trek to the Canadian border, many football-focused Clemson fans are starting to feel even more-than-usual like the Tigers have become a fish out of water.


I understand the reasoning behind that. However, the rumor seems to have no basis in fact -- thank goodness.

• Speaking of college conference realignment and scheduling, it looks like the Clemson-South Carolina series will continue without need of legislative action.

• Clemson's trip to the Orange Bowl on Jan. 4 cost $1.84 million, exceeding the Atlantic Coast Conference's allotment of $1.75 million, according to an analysis by The Charleston Post and Courier.

However, the ACC pulled in more than $40 million in bowl revenue, which is divided among the 12 member schools, so things aren't as bad as they seem.

The 70-33 loss to West Virginia, though, remains every bit as bad as it seems.

New on Tigerpundit: Video from the ACC

In my never-ending drive to enhance your user experience here at Tigerpundit, I have added a video feed from the ACC Digital Network that brings you highlights and news tailored to Clemson sports fans. You can see it in the upper-right-hand corner of this page.

I hope you enjoy it.

I'd like to thank Wayne Moore of Silver Chalice Ventures for reaching out to me about this opportunity, and Colin Smith of Raycom Sports for providing me with the codes to host the Clemson-specific video player.

Thanks, guys. It looks great, and best of luck with this venture.
Posted by Trey at 1:34 PM No comments:

New ACC football schedule could be problem for Tigers

The addition of Pitt and Syracuse to the ACC means schools will now play nine league football games a year, which could present challenges for Clemson when it comes to scheduling.

Specifically, smaller in-state schools like The Citadel, Furman, Wofford or Coastal Carolina might not get to play a highly profitable early-season game at Death Valley as often as they used to.
Posted by Trey at 11:14 AM No comments:

With the addition of Pitt and Syracuse to the ACC, the league has been forced to rejigger its scheduling for major sports.

Read all about the plans here.
Posted by Trey at 12:46 PM No comments:

The Chick-fil-A factor and recruiting

Did Clemson lose a top recruit because the coaching staff doesn't know where the Chick-fil-A is located on campus? Looks that way.

The player, Cassanova McKinzy, told CBS 42 in Birmingham that he was swayed to Auburn over Clemson because "(It was) kind of the environment and plus they had no Chick-Fil-A on campus. You had to go like, probably like 15 minutes off campus to go to like a real restaurant. Their café was kind of small."

Don't worry, though. This will all get sorted out on Sept. 1 when Clemson and Auburn meet in the Georgia Dome for the Chick-fil-A Kickoff Game.

Another top 10 recruiting class for Clemson

Clemson had another outstanding Signing Day, pulling in 20 top-notch recruits and earning its second straight top 10 class, according to recruiting experts. That's the first time that's happened since the latter days of Danny Ford.

Half of the signees are linemen, which addresses a critical need for the Tigers.

Click here for a complete look at all the signees.

Today's the day that prep superstars sign up to become college superstars. Orange and White is doing a live blog of Clemson's signing day events.

YOU ARE LOOKING LIVE at what might be the very first blog focused on college football. I'm Trey Barrineau, a former sports writer and a lifelong Clemson fan, and I collect and share Clemson football news from all over. I've been doing this on and off since 2002. Mostly off, unfortunately.